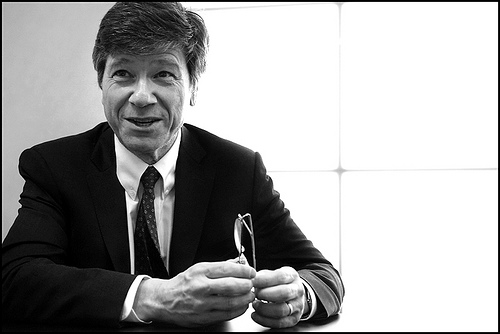 AROUND THE WORLD, people are calling for a new kind of globalization. The current version, once called the Washington Consensus, has delivered economic growth but at enormous cost: rising inequalities of income, massive environmental destruction, and growing lawlessness. The search is on for a new approach, sometimes called sustainable development, to ensure that economic growth is also socially just and environmentally sustainable.

Nine months ago, Pope Francis spoke to world leaders at the United Nations calling for such a holistic and moral vision, and the world leaders responded by adopting a new framework of cooperation for the years 2016-2030, called Sustainable Development Goals, or SDGs. The SDGs were negotiated over several years based on a simple yet powerful idea: Every one of the 193 UN member countries can benefit by a globalization that combines economic, social, and environmental objectives.

The aim is not global governance but global decency. The responsibility for change still rests with national governments and local communities. Economic development still counts, but alongside social fairness and environmental sustainability. Yet all nations can benefit from a common global framework and the efforts of every other country to achieve it.

Americans could be among the world’s biggest beneficiaries of the new Sustainable Development Goals, though the concept has hardly been discussed in the American media. While other countries have been holding forums to discuss the SDGs, the United States has largely ignored them except on campuses, in some city governments, and in many companies. Yet this is a case where the United States has a lot to learn, and benefit, from other countries.

The SDGs work for the United States because they address the core problems that ail our society. Since 1980, America has become much richer, with national income per person up by 80 percent.Yet America is now vastly more divided between rich and poor; more vulnerable to droughts, floods, and extreme storms; and less confident in its future. An astounding 73 percent of Americans believe that the country is “on the wrong track.” In short, America has become much richer but much less fair and environmentally sustainable.

The Sustainable Development Goals pour scorn on the once-popular idea that “greed is good” by emphasizing that an American society (indeed any society) built to last must look beyond greed to honesty, solidarity, and sustainability. And the SDGs offer up some practical benchmarks to measure progress. The implications for the United States are eye-opening.

While all countries have a ways to go to achieve sustainable development, the United States has much farther to go than many other countries. Each country’s state of sustainable development can be scored on a set of detailed indicators measuring poverty, nutrition, health care, education, income, jobs, gender equality, gaps of rich and poor, environmental pollution, and other specific standards for the 17 SDGs. I recently participated in the first-ever such effort to measure global progress toward the SDGs by producing an SDG Index that covers 149 countries and 77 indicators (available at www.sdgindex.org on Wednesday).

According to the new SDG Index, the United States ranks 25th in the world in the progress toward the SDGs, far ahead of the world’s poorest countries but also far behind the world leaders. The world leaders in sustainable development are the Scandinavian countries: Sweden, Denmark, and Norway, ranking first, second, and third, respectively. Northern European countries account for the remaining top 10. Canada also far outpaces the United States, ranking 13th, and Australia ranks 20th.

The SDG rankings reflect deep and instructive differences between the United States and the SDG leaders in how our societies tick and the quality of life that we enjoy. The Scandinavian economies (and Northern European countries generally) have much lower maternal and infant death rates, higher life expectancy, longer vacation times, and a far lower inequality of income. Sweden’s homicide rate is around one-seventh of America’s and its incarceration rate is roughly one-tenth. Compared with Americans the countries leading in sustainable development are also happier, with much higher ratings of self-assessed “life satisfaction.”

Even the world’s SDG-leading countries have their work cut out for them in order to achieve sustainable development. In order to stop human-caused climate change, for example, every high-income country has yet to shift energy production from fossil fuels (coal, oil, and gas) to low-carbon renewables (such as solar and wind). Two of the Sustainable Development Goals call for the shift to low-carbon energy, and the SDG Index will help to track that progress country by country in future years.

What makes the SDGs especially important is that they are far more than just another political concept or utopian ideal. They are specific, time-bound goals (to the year 2030) that have been agreed to by every UN member state, including the United States. Of course, international agreements don’t guarantee international action, yet the SDGs offer at least the chance for a global-scale effort to set things in a better direction. They respond to Pope Francis’ call in his encyclical Laudato si’ “to think of one world with a common plan.”

This week at the United Nations, 22 governments are presenting to the world their initial efforts to achieve the SDGs. The United States, no surprise, is not among these first 22 countries. We are understandably absorbed in, and distracted by, the presidential campaign.

Yet despite the current distractions, let’s work toward the United States sharing the SDG stage at the UN in one year’s time, when the SDGs will once again be reviewed. No matter who is elected in November, America will still be on the wrong track and in need of a change of direction. Our problems today go well beyond short-term politics, to the very question of our national objectives and our cohesion as a society. As the rest of the world is recognizing at the highest levels of religion, politics, business, and civil society, the concept of sustainable development offers us the chance to put the world on a more prosperous, fair, and sustainable path.

This article is published on this site with permission from Professor Jeffrey Sachs. It was first published by Boston Globe on Tuesday, the 19th of July 2016.