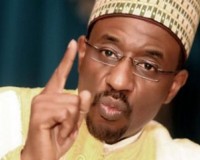 The governor of the Central Bank of Nigeria today revealed at a public event that over N6 billion was recovered for customers who have been cheated in various transactions with NIgerian banks in 2012. He said this at the annual Isaac Moghalu Foundation (IMOF) Lecture and Symposium in Abuja; adding that the recovery is to fulfill the bank’s policy of protecting customer interest.

“The Director of Consumer Protection has recovered over N6 billion in the last one year for customers that were cheated by banks,” he said.

According to reports: Mr. Sanusi said the achievement was recorded through various gender-related reforms carried out at the Central Bank as part of the Board’s commitment to ensure equal opportunities for all employees.

According to him, in furtherance of the balanced gender agenda of the Board, trainings had also been organised for 650 staffers of the bank.

He criticised women at the top of their careers and those in top political offices who use their positions for self-serving agenda, saying most of them fail to initiate or support programmes that would help in alleviating poverty, particularly among the vulnerable grassroots women and girls.

He said the much desired women empowerment dream may not be realised if they failed to support the less-privileged others, pointing out that the current regime of credit policies in the financial services sector is gender biased as a deliberate policy to remove all barriers that inhibit women from accessing credit in order to enhance their capacity to contribute more to national economic development.

“If one has a credit process that says that one needs tangible collateral or landed property in a society where women do not generally hold titles to land, one has already cut women off credit because men own the land and houses,” he explained. “And for women to even approach a bank for a loan is almost impossible,” he said.

He said the bank is already asking banks to re-think their credit policies to facilitate access for millions of women.