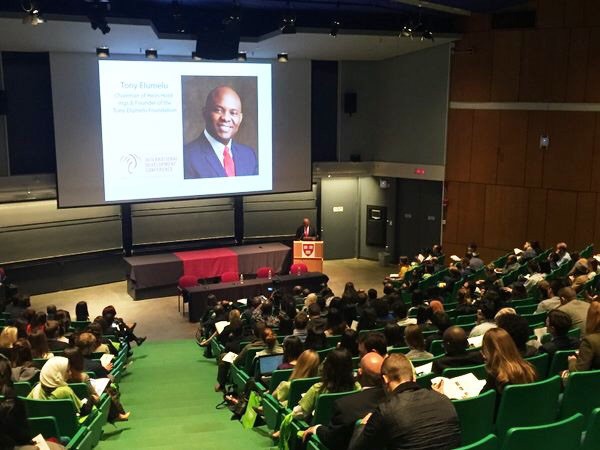 Boston, Massachusetts, April 2 – Today African businessman and philanthropist Tony O. Elumelu, delivered a keynote address at the 2016 annual Harvard International Development Conference (HIDC) in Harvard University, Boston. He went on after that to Columbia University in New York City to give a talk on Connecting Africa Through Internal Solutions for Development and Growth.

This year’s event at Harvard, themed Pathways to Progress was organized by the John F. Kennedy School of Government at Harvard University, to explore and evaluate cases of success in development.

Mr. Elumelu, the Chairman of pan-African investment company Heirs Holdings and of United Bank for Africa (UBA Plc), spoke about investment as the catalyst for sustainable growth of African businesses. “There isn’t one single path to development, particularly if poverty reduction or alleviation is a key feature of development”, Mr. Elumelu said, as he addressed the students, academia and other members of the audience at the conference.

He highlighted the difficult operating environment for most African start-ups, saying, “African entrepreneurs face the kinds of challenges that would debilitate businesspeople elsewhere. They often have to build businesses in the face of fundamental constraints that inhibit the viability of their startups such as the lack of access to power, reliable infrastructure, access to funding, and many more impediments”. He proffered solutions, imploring governments and the private sector to work together to promote economic development and job creation as they smoothen the path for businesses on the continent.

That same day, Mr. Elumelu identified three focus areas for success in economic development on the African continent through the private sector during a speech at Columbia University: intra-African investment & the expansion of home-grown businesses; local value-addition and entrepreneurship. He emphasized the role that Africapitalism has to play in Africa’s development.

The serial investor, who is also Founder of the Tony Elumelu Foundation at both Harvard and Columbia, spoke about the pivotal role his foundation – the Tony Elumelu Foundation – is playing in private sector development and wealth creation on the African continent through its Tony Elumelu Entrepreneurship Programme (TEEP). TEEP is a 10-year, $100m commitment to identify and empower 10,000 African entrepreneurs with the aim of creating one million jobs and adding $10 billion to African economies. The programme has been hailed by U.S. Secretary of Commerce, Penny Pritzker as, “raising entrepreneurs who will be the leading edge of Africa’s next wave of economic growth”.