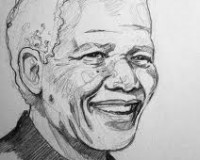 In every century there are a few names and events that mark history. When I attended the first public speech by Nelson Mandela after he was released from prison I could not have imagined that this man was going to be the absolute rallying personality of the century.

The reason why, in that square in front of Cape Town City Council, I could not have thought so, was not because I doubted one inch how special and unique Mandela was, rather, it was because I doubted an African could be recognized the world over. After all, he had spent 27 years in prison and did not create during that period, the commotion that followed. While in prison, mainstream media should have crowned him ‘Personality of the Year’ many times over, but that never happened. While the Mandela that was liberated remained the same man at his core, he had surprises to reveal that nobody could have imagined.
Mandela had time to prepare for what he believed was inevitable: the end of the most outrageous institution of the century; and the official coexistence of a regime proclaiming racial separation with an international community that had approved a Universal Declaration of Human Rights. This paradox was only one of many that created a platform for Nelson Mandela to demonstrate that he was different. He espoused complexity. He was no common hero. He emerged as the epitome of human dignity.
Mandela was one of the last African leaders who dedicated their lives to the fight for the liberation of the continent from the shackles of colonialism. He is counted among the men and women who lived, fought and died for the principle that Africa could manage its own affairs. Kwame Nkrumah, Julius Nyerere, Amilcar Cabral, Patrice Lumumba, Oliver Thambo, Nelson Mandela and many others fought the intellectual, political, social, cultural, and, sometimes, the military battles that now enable Africans to live a life they can claim to better control. The various stages of the life of this great man offer us many lessons and points of reflection. As Africa turns the century, and as we look into developing a new vision for the continent by 2063, we must take inspiration from his “long walk to freedom”.
As a leader, Mandela was father to all, and led his people through a period of truth and reconciliation. He personified passion, inspired us with his actions, and taught by example. He had a strong sense of character and stood by his convictions even when it was dangerous to do so.
Mandela has been a great inspiration to me and my generation. He embodied the unification and integration of the continent. The struggle for the total liberation Africa did not end when Mandela was released from prison as he said in that speech in Cape Town. I would like to add humbly that it cannot end with his death either, especially now as we develop the narrative for an African renaissance. Mandela’s legacy, values and truths will act as a strong foundation for a united and prosperous Africa.

*Carlos Lopes is the Executive Secretary of the Economic Commission for Africa, headquartered in Addis Ababa, Ethiopia