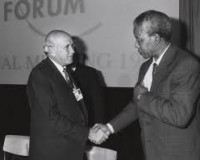 Nelson Mandela was a civil rights leader in South Africa. He fought against apartheid, a system where non-white citizens were segregated from whites and did not have equal rights. He served a good portion of his life in prison for his protests, but became a symbol for his people. Later he would become president of South Africa.

Nelson Mandela became a leader in the African National Congress (ANC). At first he pushed hard for the congress and the protesters to follow Mohandas Gandhi’s non-violence approach. At one point he started to doubt that this approach would work and started up an armed branch of the ANC. He planned to bomb certain buildings, but only the buildings. He wanted to make sure than no one would be hurt. He was classified as a terrorist by the South African government and sent to prison.

Mandela would spend the next 27 years in prison. His prison sentence brought international visibility to the anti-apartheid movement. He was finally released through international pressure in 1990.

Once released from prison, Nelson continued his campaign to end apartheid. His hard work and life long effort paid off when all races were allowed to vote in the 1994 election. Nelson Mandela won the election and became president of South Africa. There were several times during the process where violence threatened to break out. Nelson was a strong force in keeping the calm and preventing a major civil war.

He spent 27 years in prison. He refused to bend on his principals in order to be released and stated that he would die for his ideals. He wanted all people of all races to have equal rights in South Africa.

1956 Charged with high treason, but charges dropped after a four-year trial

1962 Arrested, convicted of incitement and leaving country without a passport, sentenced to five years in prison

1964 Charged with sabotage, sentenced to life