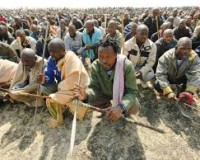 The National Union of Mineworkers, an ally of South Africa’s ruling African National Congress, said it will ask for a double-digit increase in pay when negotiating with the Chamber of Mines in May.

The demand will apply across the mining industry, NUM’s Secretary-General Frans Baleni said by mobile phone today. “We will try to conclude the negotiations before July 1,” he said.

The union was founded in 1982 by workers including Cyril Ramaphosa, who went on to lead the biggest-ever strike in the country’s gold industry five years later and is now the richest black South African after Patrice Motsepe, according to the Johannesburg-based Sunday Times. The NUM vies with the National Union of Metalworkers to be the biggest in the Congress of South African Trade Unions, which has been in alliance with the ANC since the first all-race elections in 1994.