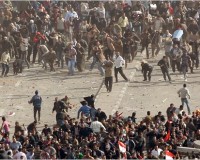 Egypte is close to an agreement with an International Monetary Fund. Planning Minister Asharf El-Arabi said that a final agreement with the IMF is to be reach  within the coming two weeks, after applying for a $4.8 billion loan.  Two year after the the uprising that ousted Hosni Moubarak, the african giant country is still facing to a daily protests,  while the economy is growing at its slowest pace in two decades. The pound has plunged and  foreign -exchange reserves  are 60 percent below their December 2010 levels.  Opposition groups called called on the IMF, whose team arrived in Cairo yesterday, to go home, saying the Washington-based lender would compound Egypt’s troubles. Egypt’s external financing needs for fiscal year 2014 could be as high as $20 billion, Raza Agha, VTB Capital Plc’s chief Middle East and Africa economist, said in an e-mail. It’s likely to get only between $8 billion and $10.5 billion from sources other than the IMF, he said.