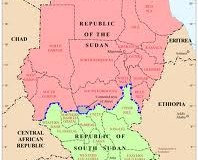 The International Monetary Fund urged Sudan to divert more than $3 billion in compensation it’s set to receive from South Sudan to back reforms that will provide the government with more reliable revenue streams. Sudan will get the funds over three-and-a-half years as part of an agreement last year to help the country cope with the loss of oil revenue it suffered when South Sudan seceded in July 2011. The country will also collect transportation and processing fees from South Sudan, which exports its crude via Sudanese pipelines to a terminal at Port Sudan on the Red Sea.

“Given the temporary nature of some of these revenues for Sudan, it is critical that they be used wisely to support reforms that will put the economy on a sound long-term footing,” Paul Jenkins, the IMF’s representative in Sudan, said in an e-mailed response to questions on April 21. Sudan’s economy contracted 4.4 percent in 2012 after South Sudan at independence took three-quarters of the formerly united country’s output of 490,000 barrels a day. The economy was also by hit by a loss of revenue after South Sudan stopped oil production in January 2012 in a dispute over export fees that brought the two countries to the brink of war.   Source: Bloomberg
IMF South Sudan Sudan
Share. Facebook Twitter Pinterest LinkedIn Email