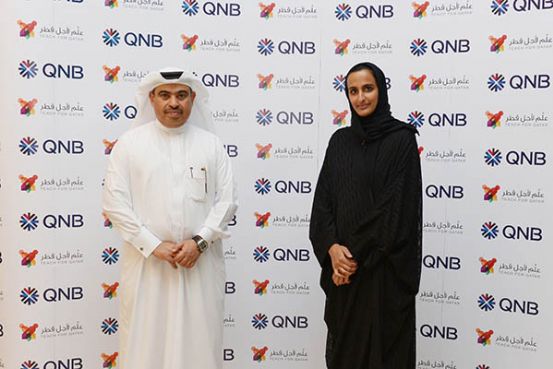 Doha, Qatar, October 12, 2017,( AETOS Wire)- QNB Group, the largest financial institution in the Middle East and Africa (MEA) region, announced its results for the nine months ended 30 September 2017, which is the highest in the history of QNB Group.

Total assets reached QAR792 billion (USD218 billion), up by 11% from September 2016, the highest ever achieved by the Group. This was driven by a growth rate of 14% in loans and advances to reach QAR579 billion (USD159 billion). Further, QNB Group’s deposit mobilisation efforts helped increase customer funding by 15% to reach QAR574 billion (USD158 billion) from September 2016. This led to the reduction in the Group’s loans to deposits ratio to 100.8%, compared with 101.3% in September 2016. This clearly demonstrates the success of QNB’s strategy to diversify its funding sources.

The Group was able to maintain the ratio of non-performing loans to gross loans at 1.8% and coverage ratio reaching 111%, which effectively demonstrate high quality of Group’s loan book and robust management of credit risk.

In September 2017 QNB Group successfully completed the issuance of Formosa bonds under its Euro Medium Term Note (EMTN) programme and listed on the Taipei Stock Exchange. Under this programme, a US$ 630 million tranche was issued with a maturity of 30 years callable every 5 years. The issuance was part of QNB Group’s on-going strategy to ensure diversification of funding in terms of type, tenor and geography.

Also the above is an example of a highly diversified international and local funding base spread across various geographies in terms of currencies, tenors and product mix.

During July, QNB Group commenced its operations in the city of Mumbai, the economic capital of the Republic of India. This network expansion comes in support of its vision to become a leading bank in the Middle East, Africa, and Southeast Asia by 2020, in addition to establishing a foothold in highly competitive markets.

Also it should be noted that QNB is now the most valuable banking brand in the MEA region, with  the value of its brand increased to USD3.8 billion, to rise to the 60th place globally, in addition to attaining the highest rating of AA+ in brand strength, making it the only Qatari banking brand among the world’s top 100. L e nombre total d’employés pour le Groupe est de plus de 27 800 opérant à partir de 1 230 emplacements et 4 200 guichets automatiques desservant plus de 21 millions de clients.