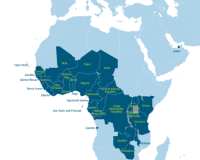 The Group Chief Executive Officer of Ecobank Transnational Incorporated (ETI), Mr Thierry Tanoh, said on Monday that the bank was targeting a 50 per cent revenue growth this financial year.  Making the disclosure at the bank’s “Facts Behind the Figures” forum at the Nigerian Stock Exchange (NSE) in Lagos, Tanoh said that the bank’s revenue appreciated by 46 per cent last year.

Commenting on the 2012 result, Tanoh attributed the growth to successful integration of its major acquisitions in Ghana and Nigeria and strong demand for retail banking services across its 33 country platforms.

He said that the Nigerian market contributed 40 per cent of the bank’s revenue in the 2012 financial year.

Tanoh said that increased trade and commercial flows between Middle Africa and the rest of the world as well as the performance of the bank’s staff contributed to the growth recorded.

The chief executive officer said that the bank would remain reactive to the yearning of its customers through strong innovations.

He, however, assured shareholders increased returns on their investment in the years ahead. Tanoh stated that the bank had finalised its integration with the former Oceanic Bank, noting that customers could withdraw their money from any branch.

Earlier, the Chief Executive Officer of the NSE, Mr Oscar Onyema, commended the management of the bank for its achievements. Onyema said that ETI was among the first quoted companies that embraced the corporate governance policy. He urged the bank to work closely with the Federal Government to unlock the inherent potential in the Nigerian economy.